As much a creative collective as an indie rock band, Broken Social Scene is a Toronto-based ensemble whose flexible lineup has included some of the best and best-known musicians from the city’s left-of-center music community. The group, whose membership has been as small as two and as large as 15, has created an eclectic body of work that’s explored many stylistic avenues, from ambient minimalism to brightly orchestrated Baroque pop.

In 2010, Broken Social Scene returned with an especially ambitious project. The album Forgiveness Rock Record was recorded in Toronto, New York, and Chicago, and included contributions from 28 different musicians, including members of Pavement and Death from Above 1979. Fans who pre-ordered the album also received a ten-song digital EP, Lo-Fi for the Dividing Nights, while also releasing seven different remixes of the track “All to All.” Another critical success, the album was nominated for the Polaris Music Prize, and rose to number one on the Canadian sales charts. (In the United States, it peaked at 34, an impressive achievement for an independent release.) In late 2010, Broken Social Scene once again went on hiatus, though they re-formed for occasional concerts and festival appearances, and in 2013 they sponsored a literary competition, inviting authors to write short stories inspired by songs from You Forgot It in People. The 13 finalists’ stories were published in a book titled The Broken Social Scene Story Project: Short Works Inspired by You Forgot It in People. The full 15-member edition of BSS reconvened to record their fifth album, Hug of Thunder, which was released in July 2017. 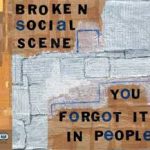